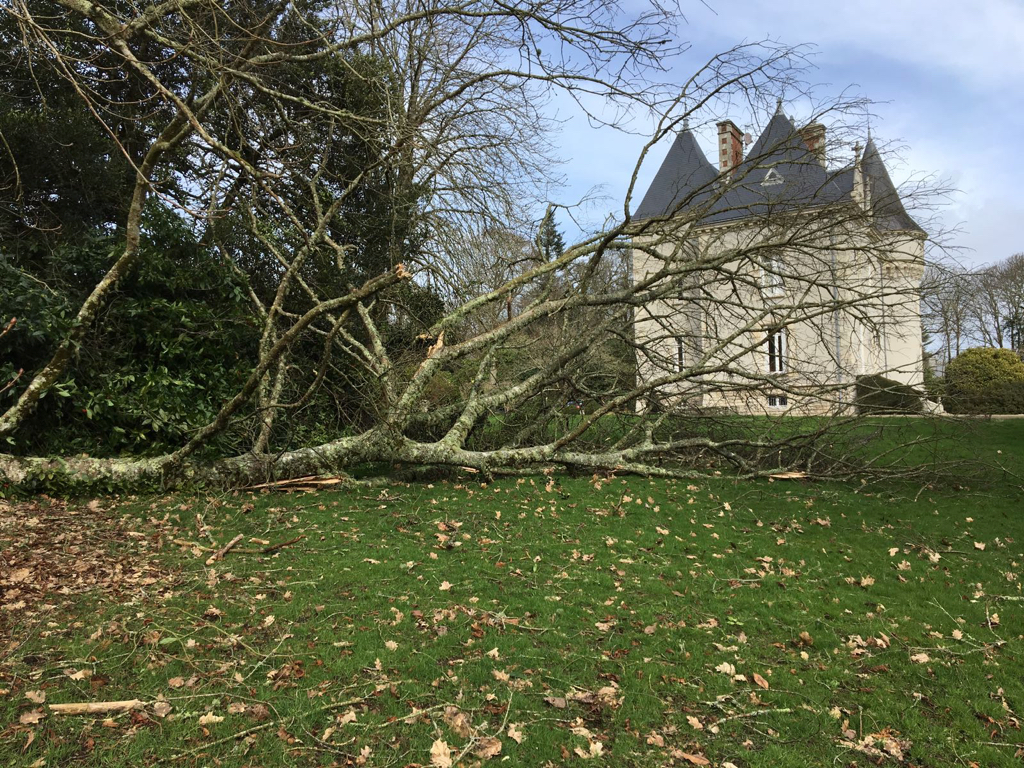 By FrenchberryMarch 27, 2017Brittany
No Comments

Standing proud into the Atlantic, and exposed on all three sides, Finistère in Brittany is well used to a winter storm, when it is not uncommon to have winds of 120km batter the coastline.

This winter we thought we had got off lightly and had escaped the Brittany storm. The first flowers were popping up in the garden and it seemed as if spring was just around the corner.

At Kistinic in Quimper on the 6th March, at 0730h on Monday morning, we awoke to a howling wind and a turbulent sky but a quick look out of the windows confirmed that no trees seemed to be down.

It took less than 10 minutes to wash and get dressed, and in that time, on the next window check, chaos reigned. A beautiful oak was down across one lawn, a huge cypress across another. Big branches were strewn over the gardens and trees were bending in two, helpless before a wind that had become frighteningly gusty and violent.

Then the power went out. The girls needed to be taken to school, so we had to manually unlock the electric gates, but on entering our road, our way was blocked by a huge pine from our garden that had fallen across the road, crushing the steel fence. We managed to just squeeze past the tip of this tree and headed off to school, accelerating past any line of trees, whilst twigs and debris rained onto the roof.

Ten minutes later, upon returning, devastation reigned. Another huge cypress had fallen from our garden, crushing next door’s fence and gate, and initiating a domino effect that brought down 6 of their trees all across the road, which would now remain blocked for over 2 days. A loop around the back roads to try to get home met only more felled trees, but we were able to help locals clear a smaller one that freed up access to our house. The poly tunnels of next-doors community veg project were in tatters, their sheeting snapping in the wind like gunshots.

Upon returning to Kistinic, branches the size of small trees were strewn across the lawns and the 6 metre crown of a 20 metre pine had been flung right across the spiral lawn.

Fortunately the chateau itself suffered no damage, but at least 20 trees were down, most of them large and old. By 9am, the wind had died down somewhat and the worst was over, but the sound of chainsaws would fill the air for weeks, if not months to come……

Tempête Zeus, later named as a hurricaine level 3, had caused devastation of many trees across Finistère. Winds of up to 193km/hr hit the coast at Cameret and Ouessant. 600,000 households had no power, many were still without electricity days later, and public areas of woodland have remained closed to the public.

The last big storms of this nature in Finistère were December 1999, and the famous hurricaine of October 1987 with winds of 198 km/hr.

The good news, is that the majority of fallen trees have now been cleared and the park is looking glorious in the spring sunshine. 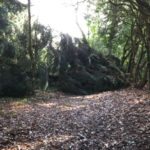 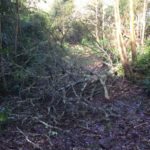 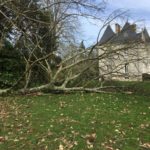 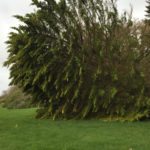 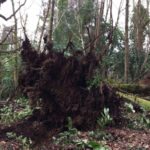 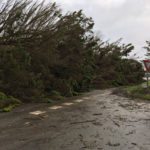 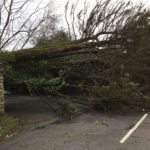 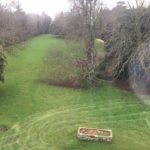