The Park at the Chateau de Kistinic by Drone

The parc of the Chateau de Kistinic (meaning horse chestnut in Breton) dates back many hundreds of years.

The domaine of Kistinic was originally over three times the size of our piece of land (approximately 53 hectares) and makes up one of the largest protected green spaces of Quimper. It was split up into three parcels in 1999. The original ‘manoir’ can just be seen quite close to our chateau. This manoir dates back to the 15th century (1426) and is no longer inhabited – the owner just likes to enjoy his land.

Our parcel comprises the chateau and the gatehouse. It is 15 hectares or roughly 37 acres, split half lawn, half woodland with banks for camelias, azaleas and rhododendrans.

The chateau de Kistinic dates from 1874 and was built by a French lawyer, it took about 14 years to complete and is build from granite and stone. The grounds were planted at about the same time, and you can still see the original rhodedendrons and camelias, some of which are over 150 years old and very large.

The parc makes the most of it’s natural water sources, of which there are at least four. The chateau has its’ own well – until recently all our water came from it and it is very pure (now we switch between it and the mains water system). The Source de St. Anne is the next one down with it’s own pool, also with very pure water; you can in fact swim in this pool (just!) but it is always very….refreshing!! We have recently uncovered another hidden lavoir, which has been buried by the laurel for years, this one seems to be much older than the others and the next project is restoring this and bringing it back to life. Next down the path is the Source de St. Joseph which also needs some work – this area was overgrown with Japanese Knotweed, but we seem to have beaten it. Somewhat hidden near the bottom is another unexploited source. All this water ends up in the River Steir, which you can see from the very bottom of the parc, the other side of the road. This river goes through Quimper, where it joins the River Odet, claimed as one of the most beautiful rivers in france and which meanders past chateau the ocean at Benodet.

During the Second World War the chateau was occupied by German officers who used it as their headquarters. Fortunately Quimper escaped any bombing or fighting as it had little strategic interest to either side (unlike Brest and Lorient).

Further planting and landscaping was done by the Bernards (no relation!) in the 1950’s – most of the stone features and some trees were installed at this time.

The woodland is protected and has many fine example of mature tree species. The parc suffered greatly in the hurricane of 1987 – many great trees were lost and some of the stumps can still be seen. Again this year hurricaine Zeus hit the park and we lost 23 big trees. Fortunately it was mainly pines and there are still many of the finest species which include Beech, chestnuts, oak, cedar, tulip and sequoia trees standing.

In 2004 we moved in and installed the swimming pool and started to get the parc back to it’s former glory, as the grounds had been neglected for many years. Above all, laurel, laurier palme, had been allowed to run wild and it has overtaken most of the woodland. It grows extremely fast and is very resilient; it shades out everything beneath it and makes trees top heavy by killing off their lower branches. This then makes the trees prone to blow over.

We are slowly removing the laurel from various areas to return the woodland to it’s natural state and allow us to walk amongst the trees, but it is a slow process!

The parc is home to many animals such as foxes, owls, falcons, badgers, rabbits and deer. The deer can often be seen grazing on the lawns.

We sincerely hope that you enjoy the parc as much as we do; April and May are the most spectacular months, as the camellias, rhodendrons, azaleas, and magnolias are all in flower. 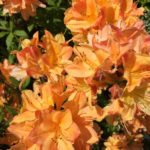 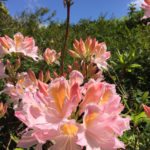 Guests at The Gatehouse are free to explore the woodland paths and lawns and wherever they want.